The Social Action Team meets regularly to communicate with and support social, economic, and environmental justice groups and to provide information regarding social justice issues within the congregation, at local and regional levels, and worldwide.  The team works with local and regional social service organizations and the Unitarian Universalist Service Committee, among other groups.  It is also the sponsor of Change for Change, which collects coinage from the Sunday offering plates and donates it each month to a designated local social service or social action organization. Social Action Team Covenant

Social Action Team meetings are open to anyone who wishes to attend.  Each meeting is generally followed by a shared supper.  To find out when and where the next meeting will take place, please contact committee chair Carol Malz.

The purpose of the Mali Task Force is to make a difference in the lives of the residents of Kalabankoro, Mali, by sponsoring 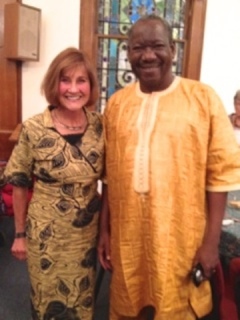 fifty-one children who can then attend Ecole Privee Youchaou (Youchaou’s Private School), founded by Youchaou Traoré.  We hope that with more education these students will be able to make  positive differences in their families, in their community, and in Mali – one of the poorest countries in the world.

The task force runs a yearly sponsorship drive:  to provide tuition and fees for these fifty-one children who would otherwise not be able to attend school; to encourage cultural exchange between our two communities; and to educate our local area about African cultures and social justice issues in that continent.  Our relationship with the Mali community also offers us an opportunity to connect with the Muslim community in our area.

Two major fundraisers are held annually:  Muffins for Mali, on four successive Sundays between Thanksgiving and Christmas (which, in addition to muffins, offers for sale artifacts from Mali that sponsorship coordinator Shirley Ferguson has purchased on her trips there); and a spring fundraiser that typically features an African dinner, sales of African crafts, and a guest speaker or relevant film.

The status of the task force is voted on annually by the congregation at the October congregational meeting.

The Mali Task Force meets on the third Sunday of every month, following the Sunday service; anyone who would like to sit in on a meeting and/or join the task force is welcome.

Saturday’s Bread is hot meal program based in Oneonta, NY. Every Saturday a free meal is served from 11 AM to 1 PM to anyone in the community who comes to the First United Methodist Church at 66 Chestnut Street. In addition, local grocery stores and bakeries donate food that can be taken home by the guests at Saturday’s Bread. Members of the Unitarian Universalist Society volunteer to help prepare and serve the meal several times each year. The coordinator for the UUSO volunteers is Deb Bruce.