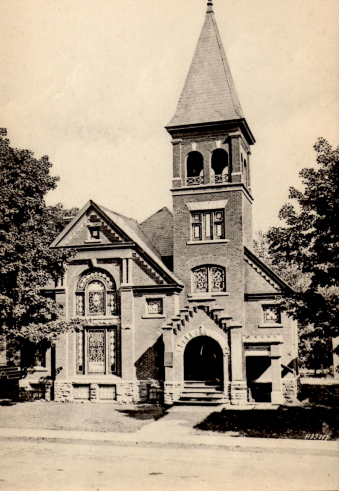 According to a 19th century source, Universalists began meeting in Oneonta in 1852. The congregation was formally incorporated in December 1877, during a period of rapid growth in the town after the arrival of the railroad in 1865. Services had been held at various locations until the first church building was completed in 1879 at 12 Ford Avenue. At the dedication, Dr. Edwin Hubbell Chapin, minister of the Divine Paternity and the Fourth Universalist Society in New York City and one of the most prominent Universalists of his generation, delivered what proved to be his last dedicatory sermon. Chapin died the following year. Shortly thereafter the wood building was named Chapin Memorial.

By the early 1890s, the substantial growth and affluence of the congregation led to plans to construct a new church. The new building was designed by local architect Lyman H. Blend. At its April 1894 dedication, the new building, like its predecessor, was named in memory of Dr. Chapin. The church prospered through the 1920s, but during the Great Depression membership declined until the six-year tenure of Rev. Charles Wyman.

On November 1, 1941, lightning struck the steeple of the building. Although the damage to the building was not severe, many of the church’s historic records that had been stored in the steeple area were lost. The steeple was never rebuilt.

In 2001, the congregation bought the property at 16 Ford Avenue for administrative offices and religious education rooms. In 2003 the building was named the Olympia Brown House in honor of the 19th century Universalist minister who was the first woman ordained by a major denomination. 10 Ford Avenue, the property adjoining the Chapin Memorial, was purchased in October 2021 and 16 Ford was sold in April 2022.

In 2002 Chapin Memorial was added to the State and National Registers of Historic Places. The congregation is proud of its long history. If you have information or artifacts that you believe would be of interest, please contact the UUSO historian at historian@uuso.org.